One Race, One Skin

To even call someone a racist means that you are one yourself. There is but one race: the human race. All men came from Adam, the first earthling, made of dust in the image of God.

All men are of the same race, we are all human beings. Though you may not like to admit it, all skin is the same color. It is true, the color of our skin is the same and  it varies from shade to shade depending on the pigment densities in our skin. A polymer called melanin is the agent which defines the tone of our skin and its light or dark color. With this fact in mind, the question arises, how did we get the many diverse shades we have today?

Here’s a graph to help illustrate the genetic variations that cause skin tone and shade: 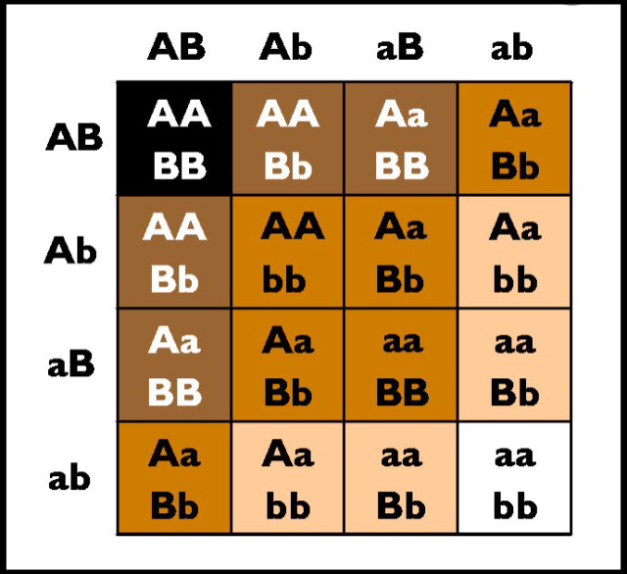 The far extremes are AA BB and aa bb. These two are the most isolated genes and the most difficult for varieties to appear in. Thus, if the mother and father are both of an AA BB or aa bb skin shade, the children are almost guaranteed to be of that same shade. Adam and Eve likely had a medium shade of brown skin, and Aa Bb tone. Their genes then, being neutral produced many variances of skin tone: AA BB, aa bb, Aa bb, aa Bb, and so on.

There are no white people. The background of this text is white. If I was that color, you would shriek at the sight of me. Conversely, no one is black colored, every person is some shade of brown, whether light or dark. Believe it or not, we are all of one race and one color.

So, if we are all of one color, why are there people of a darker shade populating all of Africa and people of olive tones populating lower Asia? Why are these shades and tones specific to different sections of the world. Well, the first cause of this skin tone segregation was the Tower of Babel. When all those who were confounded in their language split from the others to find their own lands, they isolated themselves and bred with a more narrow shade of people. Therefore, most of the people in certain areas of the world are all the same shade.

Now to address the heinous idea that was the cause of slavery for dark skinned people for many centuries: are black people defendants of Cain?

Firstly, this idea is so ridiculous I do not know how it ever got its grounding. In the Bible it says that God put a mark upon Cain for killing his brother, many have taken that to mean that Cain was given “black” skin and that his descendants are the dark skinned people of the world. By this logic, those of a darker shade of skin would truly be cursed, though still human.

The absurdity of this idea is that with the flood, all of Cain’s line was completely wiped out. Only the bloodline of Seth survived. So how could that be at all a viable answer to the question, “where did dark skinned people come from?”

It is understandable for the skin to be more lightly colored or more tan depending the heat of the sun in deferent parts of the world. But, how can a man’s skin go from light to very dark simply by exposure to the sun. Well, it can’t.

The answer to where did dark colored people come from appears in early Genesis.

And the sons of Ham; Cush, and Mizraim, and Phut, and Canaan.

This may look like your average genealogy, but Cush, is a very interesting figure in the Bible. A son of Ham, his name means “black”. Cush is the patriarch of the Ethiopians, his people founded the nation. I don’t find it odd that a man called “black” gave birth to the darkest skinned people on the planet and then branched out to populate Africa. So, how did people end up where they are? It’s all in the Bible, read it for yourself.

Genesis is the foundation of our faith and the foundation of the world, our answers are found there. It is important to treat others as equals, because in God’s eyes no one of us is better than another. As all men are of the same race and color, all men are sinners and share in Adam’s sin together. We all need a savior, no one is above or beneath the grace of God.