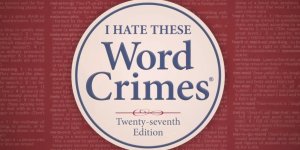 Hello, It’s me again.
If you haven’t noticed it yet, I’m not your ordinary, everyday, average Joe. I’m an analyst and a dreamer, infatuated by fantasy so much so that I mentally live in it.
When other children were staring off blankly during the sermons or falling asleep, as a young child I would be configuring real-time castle sieges. I don’t know why or how, but somehow I knew about those things even at a very tender age. I used to watch over the shoulders of my two older brothers as they played the old Age of Empires games; and perhaps that is where my medieval mind was developed.
I’m different. Some, may even call me strange, but I think precise may be a better word. I see things not often the way they are, but the way they should be. Being thus an analyst of life, little things bother me. The chief of these little things being word crimes.
Crimes like the improper usage of the contracted word “it’s”. For those of you who are not aware, contracted means that “it’s”, is actually two words: “it”, and “is”. Mind blowing, right? The apostrophe isn’t possessive! What will the think of next?
Thus, a phrase like: “The beast opened it’s jaws wide”, doesn’t mean that the jaws belonged to the beast. Rather, because “it’s” is conjunctive, it reads: “The beast opened it is jaws wide”, which is illiterate, if not ridiculous.

While I’m on the subject of ridiculous, newsflash: EMOJI IS NOT A LANGUAGE. The only valid excuse to write in emoji is that you are a 5-year-old who can’t spell real words. Emoji was initially invented as a means of appending a facial reaction to a text. The purpose was not to create a new language, but to portray sarcasm, joy, levity, sadness, etc… and being that it was more engaging than the simple colon, short dash, right parenthesis face, like so :-), it caught on rather quick. The point is to express through text what your face is saying, not to use pictures instead of words. Some people just don’t get it.

Let’s start at the beginning, these things that you see on the screen are called letters, they make up an alphabet with which we create words. Note: C, U, R, B is not something by the side of a road, it is the 4 don’ts of literacy. C, U, R, and B are not words, they are letters, simply because when sounded out, they make the same sounds as the words: see, you, are, and be doesn’t make them proper nomenclature.

I hit this hard because I am an analyst. I am also a writer, so these little things bother me; and if you are planning on becoming a professional, or at the very least a competent write, these illiteracy hazards will not aid your efforts. One of the worst things a professing writer can do is to present work with incorrect grammar, syntax, and usage. Now, mistakes happen to us all, but you represent your work. I’ll talk more about that another time, but it is important for you to put forth your best effort possible as it is a reflection of your skill and adeptness.

Bottom line: don’t commit word crimes or you’ll be put under literary arrest. Weird Al Yankovic has a great video on Vevo about this, you can click here to see that.

As always, thanks for reading, and stay legal.